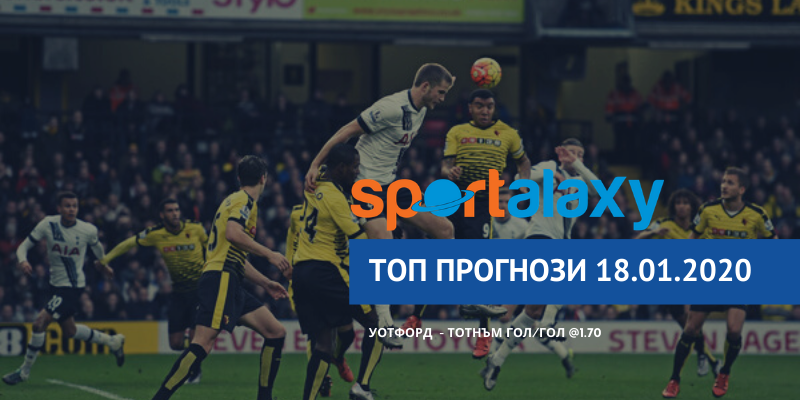 January 18 Top Predictions: Watford will aggravate the life of the Special

17.01.2020 | by Калоян Христов
The circulation is finally favorable to betting lovers. The German Bundesliga also returns on Saturday, providing us with plenty of game options.

I start with my favorite bet on Saturday, arriving from the match between Watford and Tottenham. Two teams with new coaches, but in an unusual way. Pearson proved to be the messiah for the Hornets after leading them to six consecutive non-defeat meetings. Tottenham demonstrated at the opposite pole, the team does not shine in attack, and the main problem before the Special is related to Harry Kane's injury.

Even the bookmakers' bets show us that the away win is not so sure. I expect Watford to continue the brilliant series and get something out of the next household. I bet on the exchange of goals as it has in the previous four competitions between the clubs involved. The event coefficient goes above the @ 1.70 elevation, so the experience is well worth it.

I place two more bets from England - Manchester City to score in both halves against Crystal Palace for @ 1.50 and the late Norwich and Bournemouth to trade hits, which gets @ 1.66.

The Bundesliga is back with spectacular clashes in which I expect a significant amount of hits to fall. I am betting on overtime in the rivalry between Augsburg and Borussia Dortmund. My main argument is that the hosts will find a gap in the shaky protection of the yellow-blacks, but the guests as favorites should respond to the challenge.

In the home of RB Leipzig against newcomer Union Berlin, one can look for a final outcome 1 combined with over 2.5 goals. Betting sites offer us around @ 1.65, which justifies the risk taken.

Saturday's Spanish and Italian games are harder to analyze and predict. I would choose a goal / goal between Real Madrid and Sevilla at @ 1.73, as well as in the clash between Sassuolo and Turin. I have long hesitated to bet on another success in favor of Lazio, but their unique winning streak bothers me as it will sooner or later see its end. Perhaps over 2.5 hits is the more appropriate home market against the wobbling Sampdoria squad.

And traditionally, the top forecasts for today end with a straight column, which is made up of the most likely events of the day. I rely on high scores between Feyenoord and Heerenveen - over 2.5 goals for @ 1.47. In the clash of the Belgian First Division, comparing Ghent and Mouscron, we can look for more than 1.5 home runs scored at @ 1.35. And the last bet on the football battery comes from Germany, where I expect Hoff and Eintracht Frankfurt to score goals for @ 1.53. Thus, the total coefficient of the formed Saturday column reaches @ 2.95 in the Bet365 platform.

Top predictions for February 2 February: Cueca # 23 between Mourinho and Guardiola

For the difference from the other non-week days, zavarshekty in the pelvis, the week is not sensible...

The balance of yesterday&#39;s top forecasts is three winners, only Schalke managed to sign off on h...

After yesterday&#39;s success in the Top Predictions section, it&#39;s time to take a quick look at...