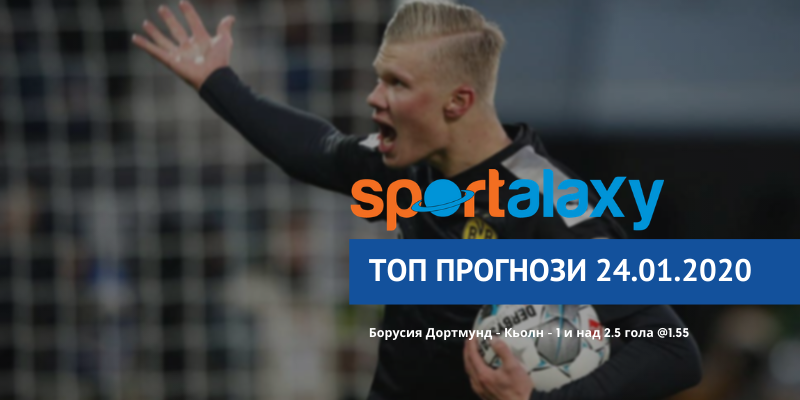 Top predictions for January 24: Borussia Dortmund to win against Cologne

24.01.2020 | by Калоян Христов
The Friday program offers us some interesting clashes from the West European terrains. My attention is drawn to the meeting between Borussia Dortmund and Cologne, but I will also look at other football events.

Borussia Dortmund have made a grand turn in the previous round thanks to their new addition Erling Holland. The young Norwegian striker scored three times at the Augsburg door, although he only got involved in the second half.

Undoubtedly, the success of last week will inspire mobilization in the ranks of the yellow-blacks who face a local rival. Cologne is in the second half of the table, but has repeatedly scored points on his visits to Eduna Park Signal.

I do not believe the "goats" will stun Borussia Dortmund in the next game, so I am hoping for a final outcome of 1 combined with over 2.5 goals. In my opinion, the hits will fall if the hosts come out with the best in the front positions.

The DAC against Sheffield Wednesday is one of the most exciting matches on Friday, so I have to pay attention to it. However, to admit, I have no idea what the final outcome will be. The two teams are so inconsistent in their performances that it seems most reasonable for me to bet on goals in both doors by a factor of 1.70.

DAC has scored 13 goals in its previous 4 official matches, but has suffered a serious defeat to Brentford. On the other hand, Sheffield Wednesday won his away visit to Leeds, but in the next round allowed a 0-5 defeat by a neighbor in Blackburn.

Serie A offers us a match between Brescia and Milan, in which I expect the 2.5 goals line to be completed for @ 1.72. The Rossoneri have been hindered by Ibrahimovic's arrival, which is said by three consecutive victories. Although the hosts lose points, they score relatively often, so I think they will find a gap in the protection of the guests.

And my final straight column is made up of three Dutch duels. In the Eredivisie rivalry between Utrecht and ADO Den Haag I bet on overtime, over 2.5 hits, for @ 1.50. NEK Nijmegen and Ajax doubles will exchange goals for @ 1.40, while Cambuur and Utrecht's second team will score more than 2.5 goals. Thus, the total coefficient formed reaches @ 2.85 in the Efbet platform. It is a good option for more valuable bets as the Dutch divisions offer us a clear offensive football.

Top predictions for February 2 February: Cueca # 23 between Mourinho and Guardiola

For the difference from the other non-week days, zavarshekty in the pelvis, the week is not sensible...

The balance of yesterday&#39;s top forecasts is three winners, only Schalke managed to sign off on h...

After yesterday&#39;s success in the Top Predictions section, it&#39;s time to take a quick look at...

Latest News
Get a $ 10 bonus for every live bet on a Belarusian match Palms bet registration. Steps to create a new account Goals in Nicaragua according to Super Hot Winbet bets No joke, no cheat - Clarence Seedorf turns 44 today! On this day: In 1995, the world No.1 and No.2 played in a Davis Cup team
Categories
All Categories Football news Football analyses Top betting tips for today European Championship 2020 Tennis news Basketball news On Wheels Extreme sports Olympics Other sports Bookmakers Sports fun Coronavirus