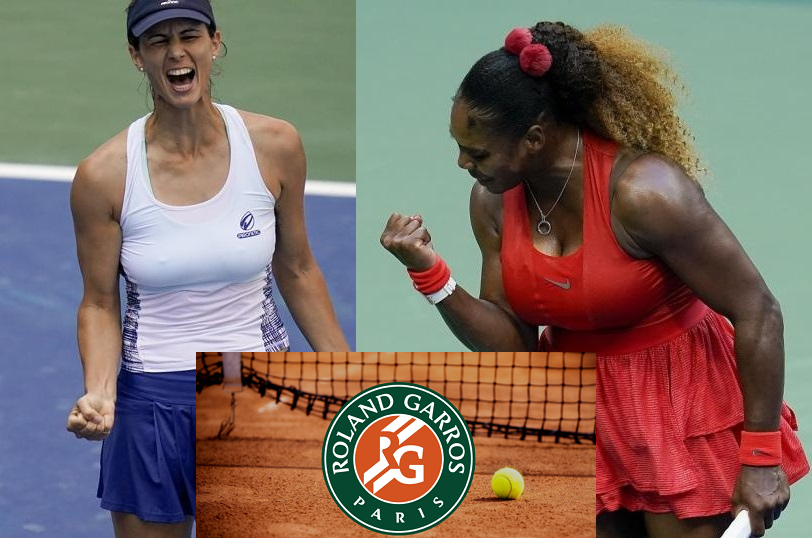 
Tsveti comes out on the court today in another attempt to beat one of the greatest tennis players in history. This time, however, even the bookmakers do not recognize her as an absolute outsider, and the odds for her victory are about 3.

The two tennis players make memorable matches with each other. In 3 of the five matches so far, Pironkova managed to take the first set, just to make a turnaround. After a strong performance at the US Open, as well as the victory in the first round over Andrea Petkovic, Tsveti is charged and full of ambition for a memorable participation in Roland Garros.

Needless to say, Serena's successes are worth noting, but last year she did not perform very well here and dropped out in the third round of the then 20-year-old Sofia Kenin. This year, the American has already suffered losses from much weaker tennis players - Wang, Sevastova, Rodgers and Sakari. In fact, in 2020 so far she has only three clear successes with 2: 0 sets, which shows that it is becoming increasingly difficult for her to win her matches.

Tsveti Pironkova stayed only 74 minutes on the court against the German Petkovic. She managed to make 6 breakthroughs in the match, but also allowed 3. The glue can not be defined as her favorite flooring, but this year this is not a big factor given the weather and the new balls that are in play. Let's wish her success in the match!


Today, several of the men's favorites are on the court for their second matches. The caravan was led by the Swiss Stan Wawrinka. In his match, which should start at about 12 o'clock, he will face the German Dominik Kopfer.

Wawrinka is not experiencing the strongest period in her career. Already at 35 and at number 17 in the ATP rankings, the tennis player seems to have passed his peak. Here, however, come the big "buts". In 2015, he was not the main favorite of Roland Garros. The scheme then turned out to be some incredible duels. In the quarterfinals, Wawrinka managed to debunk one of the main favorites - Roger Federer, beating him with 3-0 sets. Novak Djokovic, on the other hand, did a lot of work, eliminating Rafa Nadal and Andy Murray successively to reach the final in Paris. Whether the fatigue from the 2-set match with Murray, or the fact that there was no day off, prevented the Joker in the coveted match.

The rest, as they say, is history. Wawrinka won the second of her three Grand Slam titles at Roland Garros. There is more - this year Stan has a balance of 16 wins against only 3 losses, and his balance on clay is 8: 1. In the first round he took Andy Murray, giving him only 6 games and allowed only 3 break points - in the second game of the third set.

Dominique Köpfer experienced the tournament of his life, reaching the quarterfinals in Rome. However, it should be mentioned that there he did not meet any of the top favorites until his match with Djokovic. This, together with the fact that glue is not his favorite flooring, make Stanislas Wawrinka a complete favorite in the match.

When you beat the nine-time champion in Rome Rafael Nadal, with 2-0 sets, you can't help but become the favorite to win the title. That's what 28-year-old Diego Schwartzman did 10 days ago. Reaching the final of the tournament was a great achievement for the Argentine, and in the first match of Roland Garros he swept the Serbian Ketsmanovich - 6: 0, 6: 1, 6: 3.

With today's victory, Lorenzo Justino will probably surpass his top ranking in the ATP rankings. The trick, however, is that this top ranking is 151st. He is currently in 157th position. The Italian played the longest match so far at Roland Garros, remaining 6 hours and 5 minutes on the court to win the match of the first round against the Frenchman Mute. Recovery time is not much, but for comparison, Diego Schwartzman finished his match in an hour and 48 minutes and is an absolute favorite of the bookmakers.

We also reach one of the top favorites in the tournament. US Open champion, finalist of last year's edition of Roland Garros, specialist in clay and world number 3 at the moment. Dominic Thiem is among the players destined to break the dominance of the Big Four. The Austrian, born in 1993, gained the necessary dose of self-confidence after the triumph in New York and will appear on the court hungry for success.

Jack Sock is a very interesting case. Only 3 years ago, he was number 8 in the world, participating in the world finals in Paris. The fall of the American is huge and today he enters the match as number 310 in the ATP rankings. It is very likely that he will expect more doubles tournaments at Roland Garros, where he has quite serious success. Today, however, Team is the absolute favorite, and a victory with 3: 0 sets is estimated at 1.44 odds.

With all due respect to Mackenzie MacDonald, today we will spend very little time for his match against Rafael Nadal. The American is 25 years old, but rarely leaves his homeland and plays tournaments mainly in the United States. It is an interesting fact that Mackenzie has been on the tour since 2012, but in the official statistics only 17 matches have been played on clay, of which only 4 wins. Skipping the first round of Roland Garros may be a huge achievement for the tennis player, but today's test will be impossible.

There is hardly any need to talk about Rafa Nadal. we will only mention that some bookmakers do not accept bets on its success today.

Hardly anyone expects a surprise from Pierre-South Erber against Alexander Zverev today. Even the drop in the rankings for the German leave him as one of the strongest players. Under a number of circumstances, he reached the US Open final two weeks ago and will certainly be even more hungry for success here.

We also note the second matches of Casper Ruud and Kay Nishikori, which will start no earlier than 3 pm today.


Vika Azarenka is experiencing a second youth after the Coronavirus pandemic. The tennis player won a series of 12 consecutive games in the United States, losing the final of the US Open after the title in Cincinnati. Victoria played for about an hour in the first round and gave only 3 games to Kovinic. Azarenka is considered one of the top favorites of Roland Garros.

Schmidlova had a difficult task to play with Venus Williams. Although she recorded a clear victory, she spent a little over 2 hours on the court. Today's test, however, appears to be impossible for the Montenegrin, who is 161st in the UTA rankings. Indicative is the fact that Azarenka's success with 2: 0 sets is estimated at 1.35 odds.

Another clash of the favorite against an absolute outsider in women is the match Svitolina - Sarasua. The Ukrainian has been in the top 5 of women's tennis for 4 years, which is quite a serious achievement, given the frequent exchanges at the top of UTA. She warmed up for Roland Garros with a Strasbourg title last week. However, the first round was not easy and Svitolina, who was named the absolute favorite, allowed 6 breakthroughs on her serve against the Russian Gracheva. Renata Sarasua, on the other hand, was quite convincing and gave only 3 games per hour to the representative of the hosts Jacemo.

In an underestimation by Svitolina today we notice a very high coefficient of 1.91 for a handicap of +5.5 games for Sarasua.

Simona Halep is a favorite in every tournament she plays in. The Romanian enters the match today with an asset of 21 wins and 2 losses for the year so far. These victories brought her the titles in Dubai, as well as the titles in Prague and Rome. Halep has won all five matches against today's rival. Roland Garros is a symbolic tournament for her. She pursued her Slam title for years, until she finally won it in Paris in 2018. Last year, Simona surprisingly dropped out of Amanda Anisimova in the quarterfinals and most likely prepared for a rematch.